The island of Santorini or Thira is an island of the Cyclades complex in the southern Aegean Sea. It abstains from Piraeus 128 nautical miles with an area of up to 75.8 square kilometers. It is known for its volcanoes, which are the youngest in Greece and one of the most active throughout Europe. Santorini belongs to the volcanic arrow of the Aegean and is classified as an active volcano.
The Minoan explosion which occurred in 1613 BC resulted in the creation of what is today known as the “ Caldera” of Santorini, as well as the total destruction of  its civilization and gave the island the half moon shape it has today. From first glance the side of the volcano is presented somewhat rocky in contrast to its smooth interior.
The climate is humid and the soil mostly consists of sponge rock which is ideal for cultivation.
The island main export is wine as the local vineyards prosper from the volcanic soil in conjunction with low rain as well as the winds. The main varieties of wines produced are the “Nychteri”, and the infamous Vinsanto which is used by the Catholic Church for Holy Communion.  Cherry tomatoes, fava and katsounia (a type of cucumber) are also produced on the island.
All the traditions and customs are still upheld within the local wedding ceremonies, while on Big Friday at the village of Pyrgos little cans are lit with oil at the points where the Epitaph will pass by resulting in a mesmerizing sight leaving one humbled.
Santorini is an island full of magic, awarded as a top destination globally, is just waiting for you to captivate you with its wild beauty and will offer you the vacation of a lifetime that will remain forever in your heart.

Fira is the charming capitol of Santorini. It is located on the Western side of the island and is built on its cliffs at an altitude of 260 meters above sea level. In contrast to other villages in Santorini, Fira is the center of attraction for many visitors as they are offered a plethora of sights and facilities to satisfy all tastes and desires. One will find everything in Fira – luxurious hotels, cafes, restaurants, bars, traditional taverns, as well as pubs and clubs.

Akrotiri is location on the SW part of the island, 15 km from Fira. The ancient city of Akrotiri is most definitely an impressive sight which is a must see while in Santorini. Akrotiri became known primarily for its ancient city which was discovered from excavations which began during 1967. Visitors may the visit the ancient sight following a controlled path while admiring the ancient city structure which stretches a vast 200 acres.

Located 3km from Perissa and 10 km from Fira on the southern part of the island you may find the beach of Perivolos with its crystal clear waters and infamous black sandy beaches. It is one of the most if not the busiest beach on the island. Along the beach one will encounter a number of various restaurants and beach bars for you to enjoy your drink or meal with the Aegean as a view. Water sports are also available in its beach bars. 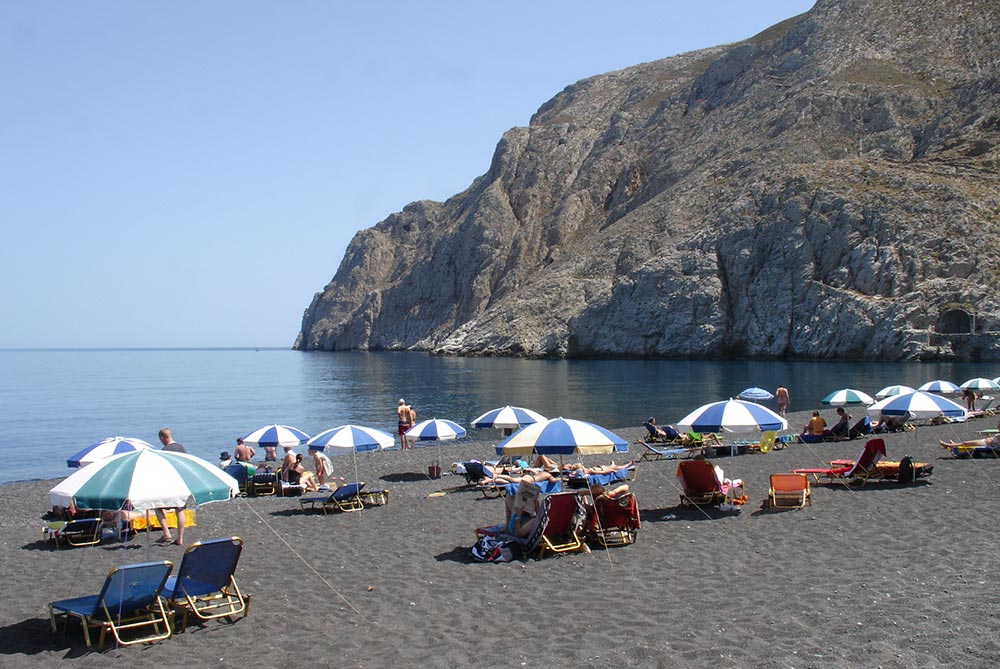 Kamari is another popular towns of Santorini. Its 10km from Fira, and is known for its touristic infrastructure. Its beach is one of the most known on the island. It boast black sand, and is very organized and stretches all the way to Monolithos. While swimming in Kamari visit the ancient city of Thira and don’t forget to go on an evening stroll along the beach and enjoy a cocktail in one of the countless bars in Kamari.

Pyrgos is a medieval jewel located on a hill overlooking all of Santorini from one end to the other, from Akrotiri till Oia. Venetian elements can still be observed throughout the settlement through its Churches and old structures granting a sense of empowerment and prosperity. Three great domes decorate the village harmoniously coexisting with the mansions and houses alike. Climb the mountain! There are countless scenic routes one can take to reach the top. Watch the view from the monastery. It is at the very least, impressive!

Oia the crowned jewel of Santorini. It is globally renowned for its magical sunsets. Every day the crowd from all over the world gathers together to witness that magical moment when the sun disappears from the horizon of the Aegean and the sky is lit up by the numerous shades of violet and red. Oia is built at an altitude of 350 meters above sea level and is located on the northern part of the island approximately 11km from Fira and 6χλμ. από το Casa di Mare. It stands out for its cave homes built within the cliffs themselves. Such settlements are only found on Santorini, due the unique layout of the island. 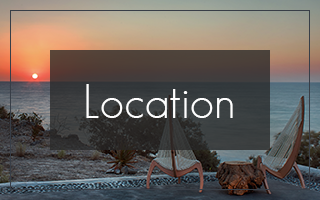 Make an enquire
Get in touch with us
Call us, email us or write to us…

Casa di Mare, is an independent, fully autonomous high end villa of exceptional standards. It is best suited for those who wish to isolate from the hustle and bustle of the city while enjoying a luxurious and modern haven with a view to the infinite Aegean blue.

Get in touch with us by phone, email or contact form! We will be more than happy to assist you!